The Empath Vs. Empathy

When I was younger I quite literally drowned in both my own emotions and emotions of others. I had no understanding of what was happening to me. Let me give you an example.

My boyfriend at the time, whom I was engaged to for a very long time, told me he loved me. I knew, beyond a shadow of doubt that while yes he did love me, it was more of the comfort of what he knew than a real passionate love worth spending your life together over.

How did I know that? Well, if you had asked me that question then I would have faltered and doubted myself, as to the reason I felt this way. And if you had compounded that by asking me something like 'Isn't it you that was actually getting cold feet and not him?', I would probably have hedged even more.

At the time, I could find no rhyme or reason for this. I knew the truth within myself, but I had no way, short of asking him directly, to know what he thought about it. And when I asked, he denied it.

But slowly we began to disengage from one another, until finally we both went our separate ways. And as much as I love him, even now, it was the best thing we could have done for one another.

So have you ever had an unexplained moment of knowing, in which you simply felt what the other person felt, without rhyme or reason? Was it random or with someone you were close to? And with time, did you find that those feelings, from that one moment, were validated in some way, making you stop and go back to reevaluate what had happened based on the idea of being an Empath?

One site says Empathy is a sense of shared experience, including emotional and physical feelings, with someone or something other than oneself. Another site says Empathy is the ability to emotionally relate to another individual's emotional state. Another webpage sites Empathy as the action of understanding, being aware of, being sensitive to, and vicariously experiencing the feelings, thoughts, and experience of another of either the past or present without having the feelings, thoughts, and experience fully communicated in an objectively explicit manner; also : the capacity for this. 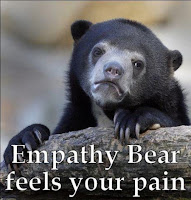 Empathy can also be broken down into two subcategories: Emotional and Cognitive Empathy. Here is a look at each of them.

Emotional Empathy occurs when you feel physically along with the other person, as though their emotions were contagious.

This kind of Empathy makes someone well-attuned to another person’s inner emotional world.

Cognitive Empathy is having a consciousness of the need to imaginatively put oneself in the place of others in order to genuinely understand them,which requires the consciousness of our egocentric tendency to identify truth with our immediate perceptions of long-standing thought or belief.

But here is the catch to that statement. People who are Empaths, are predisposed to showing empathy, more often than not. They are also structured in such a way, that if they choose to do so, they can pinpoint where random emotions, which are not their own, are coming from. And they are, generally, capable of expressing empathy to others. But this, like any project, is a conscious choice and must be worked toward in earnest.

The title Empath is not a validation of being different. It only says the person, in question, is highly sensitive to emotion. But when one is both an Empath and empathic, the idea of the Empath takes on a whole new sphere of meaning. This is because it becomes a conscious choice, as much as a naturally occurring instinct from which one is bombarded by the random emotions of others.

What is the goal of every untutored, impaired, or beginning Empath? Quite simply put, to rise above the issues of drowning in other's emotions in order to have a genuine sense of themselves, as well as, the ability to help others. But understand, this is simply one goal that most, but not all, aspire to. There are always exceptions to every rule.

First they seek out community, for validation and Q&A. Then they seek to understand what they are going through, with the support of their peers. Then they begin to believe in themselves, as people and as Empaths.

So in saying this about Empaths, empathy plays a HUGE roll in the life of developing themselves into a healthy person and Empath. Its inescapable. One must learn to take conscious control over this gift, because of the weight it forces the Empath to shoulder, in order to find some balance within their own lives. So as much as one seems to have nothing to do with the other, they do indeed go hand in hand. Otherwise it can be categorized as a disease, curse, or a punishment from which the person who is an Empath feels persecuted and isolated.

This is not an easy feat, and nor is it something that will happen overnight without doing the work associated with rising above oneself and out of one's box.

Think about it, because no matter how many elements of these two dissimilar ideals are apparent, they still go hand in hand upon the path we tread ever forward upon. ^_^
Posted by Misu at 9:04 PM