In ancient India and Tibet, it represented perfection, dualism, and unity between male and female. In the occult tarot it's linked to magic and represents equilibrium or the balance of various forces. The uroborus (a circular serpent biting its tail -- a UN symbol for "Human Settlements") has been found in this shape. In modern times, it became a secular mathematical symbol for infinity in numbers, time or space (eternity).

ANKH:In hieroglyphics, the ancient Egyptian form of writing, the ankh translates to "life" or "living." It is sometimes referred to as the Egyptian cross. The loop of the ankh is believed to represent the Nile River, and the cross represents the path of the sun from east to west. Symbolizing life and immortality, the ankh represents regeneration, regrowth and renewal.

(majuscule: Ω, minuscule: ω; Greek Ωμέγα) is the 24th and last letter of the Greek alphabet. In the Greek numeric system, it has a value of 800. The word literally means "great O" (ō mega, mega meaning 'great'), as opposed to Omicron, which means "little O" (o mikron, micron meaning "little").

As the symbol of the Sumerian goddess Ninhursag, the omega has been depicted in art from around 3000 BC, though more generally from the early second millennium. It appears on some boundary stones on the upper tier, which indicates her importance. 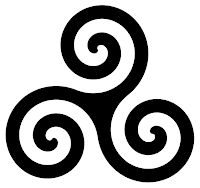 TRISKELE: The triskele, or triple spiral is a symbol closely related to the triquetra. It is a tripartite symbol composed of three interlocked spirals. The spiral is an ancient Celtic symbol found at the Neolithic "tomb" at Newgrange. It is related to the sun, afterlife and reincarnation.

Triskeles are very common in Celtic art. They can be found in a variety of styles, both in ancient and modern Celtic art, especially in relation to the Mother Goddess. They also evoke the Celtic concept of the three domains of material existence (earth, water, and sky), and their interrelations. 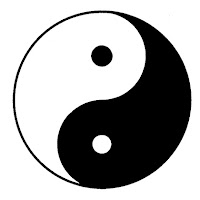 The ancient Chinese subscribe to a concept called Yin Yang which is a belief that there exist two complementary forces in the universe. One is Yang which represents everything positive or masculine and the other is Yin which is characterized as negative or feminine. One is not better than the other. Instead they are both necessary and a balance of both is highly desirable. 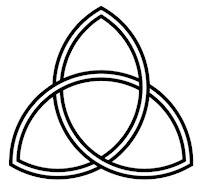 TRIQUETRA: Triquetra is a Latin word that means "three cornered". Originally, it simply meant "triangle" and used to refer to various three-cornered shapes. In ancient times, the #3 was sacred and revered as an extremely powerful number. Today the symbol is often a more complicated design with a circle that weaves through the three interconnected loops of the Triquetra. The circle emphasizes the unity of the whole combination of the three elements. The symbol is also known as the Trinity Knot.

A widely recognized knot for the past two centuries, the Triquetra has been used as a sign of special things and persons that are threefold, such as Mother, Daughter, and Grandmother - Past, Present and Future - the Trinity of soul, physical, mental and spiritual – and especially the Holy Trinity, the Father, Son and Holy Spirit. It is uncertain what the symbol truly meant to the ancient Celts.

The symbol meaning of the Triquetra typically represents the three stages of the feminine life cycle, the maiden (the young virgin), the mother (pregnancy and motherhood), and the crone (old age and wisdom). It can also represent the threefold of nature, earth, water, and sky or it can represent three fishes ("Pisces"). During the persecution of the Christians, the fish was a valuable and secret symbol. When two people of the Christian faith came together one would draw half the fish in the sand, and if the other drew the other half of the fish symbol in the sand, they knew it was ok to talk. The Circle represents unending love for and from the creator, and unending love for man and woman.

To Modern Pagans, the Triquetra symbolize a variety of concepts and mythological figures. Celtic Reconstructionist Pagans use it either to represent one of the various triplicities in their cosmology and theology (such as the division of the world into the three realms of Land, Sea and Sky), or as a symbol of one of the specific triple Goddesses. 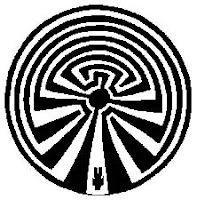 LABYRINTH: Life and Choice, depicted in this common symbol, "the-man-in-the-maze" was originally created as an illustration of an emergence story by the Tohono o'odham or Papago Indians of the Central Valley in Arizona. TRhe little man is named "U'ki'ut'l" in their language. It has been adopted by other people because it is significant of life's cycles and eternal motion and also of the choices we are confronted with. The right choices lead us to a point of harmony with all things, no matter how hard or long the road taken. This symbol is especially utilized by Hopi silversmiths as a way to showcase the quality of their technique.

LABYRINTH: A labyrinth is an ancient symbol that relates to wholeness. It combines the imagery of the circle and the spiral into a meandering but purposeful path. It represents a journey to our own center and back again out into the world. Labyrinths have long been used as meditation and prayer tools. A labyrinth is an archetype with which we can have a direct experience. Walking the labyrinth can be considered an initiation in which one awakens the knowledge encoded within their DNA. 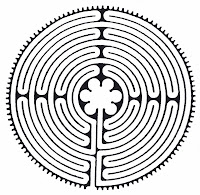 A labyrinth contains non-verbal, implicate geometric and numerological prompts that create a multi-dimensional holographic field. These unseen patterns are referred to as sacred geometry. They allegedly reveal the presence of a cosmic order as they interface the world of material form and the subtler realms of higher consciousness.The contemporary resurgence of labyrinths in the west is stemming from our deeply rooted urge to honor again the Sacredness of All Life. A labyrinth can be experienced as the birthing womb of the Great Goddess. Thus, the labyrinth experience is a potent practice of Self-Integration as it encapsulates the spiraling journey in and out of incarnation. On the journey in, towards the center, one cleanses the dirt from the road. On the journey out, one is born anew to consciously dwell in a human body, made holy by having got a taste of the Infinite Center. 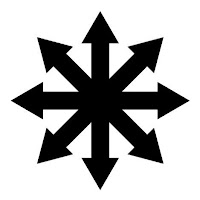 CHAOS: A state lacking order or predictability. In Greek myth, Chaos is the original dark void from which everything else appeared. Chaos was the nothingness out of which the first objects of existence appeared.

The Chaos star is a symbol with eight equidistant arrows radiating from a central point. The Symbol of Chaos originates from Michael Moorcock's Eternal Champion stories. In contrast, the symbol of Law is a single upright arrow. It is also called the Arms of Chaos, the Arrows of Chaos or the Symbol of Eight.The Chaos star is used in chaos magic, as is its 3D analog, the Chaosphere.Its current rounded shape was devised by occult author and chaos magician Peter Carroll. The chaos wheel is a popular decorative emblem for jewelry and clothing. 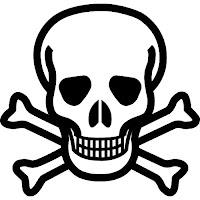 SKULL & CROSSBONES: The symbol is indicative of danger and impending harm. It's association with death, poison and secret societies and their undertakings has resulted in the symbol being recognized as a fraternity and unicode motif.

As a symbol of the deceased, a common idea is that the two bones represent crossed arms, forming a sign of the Christian Cross over the body. However, this custom pre-dates Christianity, as seen in Egyptian mummies of royal males like Rameses the Great shown on the left. This is a defensive posture to protect the departed in the next life.

In fact, rather than arms, the bones of the Skull and Crossbones are usually two femora (thighbones) which are the longest and largest bones in the body. The skull and these bones can survive much longer than the rest of a skeleton and therefore symbolize a long time after death. In other words, it's a symbol of the very dead.

Infinity, the ankh, the omega, the triskele, the yin yang, the triquetra, the labyrinth, chaos, and death, each with their respective meanings, seem on the surface to have nothing to do with Empathy, right? 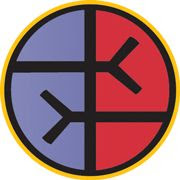 I mean what could these random symbols have to do with an emotional process like Empathy. And yet, each of these represents a singular piece of the human equation.

These symbols encompass faith, ideals, fears, and human theories of time and existence as a whole. So, relatively speaking, because they were all generated from the human mind and the human experience to explain the unexplainable and make it tangible for the common person, they are, in their own way, forms of Empathy.

This is because Empathy is more than just understanding and sharing in the emotions and emotional states of others. It is an ability that expands outwardly into everything in life from ideas of deity to ideals we strive toward to ideas of space and time to fears of chaos and death.

Empathy, in its own way, is our way of attempting to understand the world around us, much as we do when we empathize with other people and their pain to understand them on a deeper level. Symbols are an expression of this broadened definition of Empathy, because when you see a symbol that is recognizable to you, you immediately know its meaning. This is much like meeting a person who is in the throws of deep sorrow, and recognizing and/or feeling it along side them immediately. You recognize their pain and you share it, just as you recognize the symbol and its meaning.

So give it some thought as you look at the world around you and the multitude of symbols within it. It is extremely interesting and intriguing to contemplate.
Posted by Misu at 6:06 AM